Did you know that Hungry Hollow in Georgetown is in a “biodiversity hotspot” (or more formally, a “centre for biodiversity”)? Our local conservation authority, Credit Valley Conservation (CVC), did an inventory of the whole Credit River watershed. They named eleven special places that are home to a particularly varied mix of native species. Willow Park and the Silver Creek ravine are within one of them, the Credit River-Hungry Hollow Centre for Biodiversity.

Special places can come with special problems, however. And Willow Park Ecology Centre (WPEC) has become a local leader in dealing with one particular problem: an invasion of European buckthorn along the Silver Creek valley in the Town of Halton Hills. Buckthorn is a hearty, prickly, shrubby plant that was brought here by Ontario’s early European settlers. Without natural predators, it spread beneath native trees and began to out-compete them. Today it’s pervasive.

In a successful effort led by Willow Park Ecology Centre’s Program Director and Park Manager, Tunde Otto, seven partners came together in 2014 to form the Hungry Hollow Collaborative – a group championing ecological restoration efforts in 25 hectares of the 150-hectare ravine. In support of the Town’s Hungry Hollow Management Plan, the group decided to work together to craft a restoration proposal for invasive species removal and replacement plantings.

To date, in two seasons of work, the Hungry
Hollow Collaborative has removed buckthorn from 20 hectares. Over two years the diversity of native trees was increased by the planting of 1500 trees/shrubs of 15 varieties, and 400 volunteers have been trained in Best Management Practices while planting native species and removing invasive species.

How did we make it happen?

WPEC identified the Ontario’s Ministry of Natural Resources’ Habitat Restoration and Stewardship Program as a suitable funder for the kind of work proposed, and wrote a grant application. A key part of its success was the ability of the partners and volunteer participants to multiply the value of the project beyond the core funding provided by the government, in both cash and in-kind contributions.

In the spring of 2016 the Collaborative met on-site and mapped out the area to target the strategic removal of invasive species. Locations designated for removal work over the coming year were located near woodland and wetland ecosystems which had been identified by CVC as high-priority conservation areas. The partners agreed that, ideally, this kind of initiative would require repeated interventions to get invasive species under control over a number of years.

Ravine neighbours and trail users were informed about the project: the Town wrote letters to homeowners adjacent to the ravine, and posted signs to notify the public about the partnership and the work to be done. Several of the project partners began to recruit volunteers to be trained in best-management practices and ecology conservation while doing hands-on removal of small to mid-size buckthorn trees.

Beginning in May, volunteers were led by professionals to work in designated areas, work which continued periodically over the summer and fall. Using extractigator tools, shovels and pruners, and simple hand-pulling for smaller plants, the volunteers cleared patches along the Miller Drive Trail. In the area identified as the highest priority for professional removal of the densest-growing larger trees, the town contracted with a local forester to cut and mulch the buckthorn west of Mountainview Road. As part of the restoration aspect of the project, CVC led student plantings in parts of the ravine where they wished to supplement native tree and shrub species. 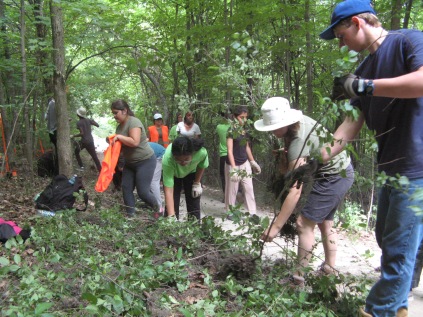 Over the 2017 season, the process was repeated – volunteers were recruited for five sessions of pulling smaller, denser patches; professional contractors were hired to treat buckthorn scattered throughout the area with a herbicide (basal-bark treatment) to kill standing trees, leaving them in place to subsequently fall and contribute to the forest floor ecology. At the end of the second season, CVC and student volunteers planted 450 native trees in the target area. 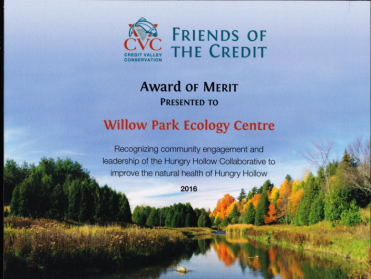 In March, 2017, Willow Park Ecology Centre received a CVC Friends of the Credit Award of Merit for “recognizing community engagement and leadership of the Hungry Hollow Collaborative to improve the natural health of Hungry Hollow.” They also received the 2017 Arts Alive Award from the Halton Hills Cultural Roundtable for heritage conservation.

The Hungry Hollow Collaborative is enormously grateful to the nearly 400 wonderful volunteers who generously helped with this work and made our success possible!

We are excited to report that we have been successful in our application for two grants for Phase III of the Hungry Hollow Collaborative: one from the Great Lakes Habitat Restoration Fund, and the second from the Ontario Ministry of Natural Resources Land Stewardship Habitat Restoration Program. Planning is underway with our partners for a third season of restoration in Georgetown’s beautiful Silver Creek ravine. Check our website for volunteer opportunities to join us in our stewardship work in 2018!

The Power of Partnering

The Hungry Hollow Collaborative has demonstrated that partnering for biodiversity is a powerful catalyzing force for setting common goals, networking, sharing expertise, sparking enthusiasm and commitment among the partners – and making a strong case for procuring funding. We hope we’ve led the way for other groups to partner for biodiversity all along the Credit River Valley and beyond.

Watch the Hungry Hollow video and share our passion for local ecology!

We are just east of Georgetown, with access and parking at Mary St off Hwy 7.

Book a program with us!

Register for an event!

Check out the events calendar below for a full list of events.

We are just east of Georgetown, with access and parking at Mary St off Hwy 7.